I’m excited to share new photography work I created for First Onsite, a company based in Colorado that does fire and flood remediation for corporate office settings. The shoot was produced by Image Brew, a video production company based in Denver and a favorite client of mine since I relocated to Denver from Washington, DC. 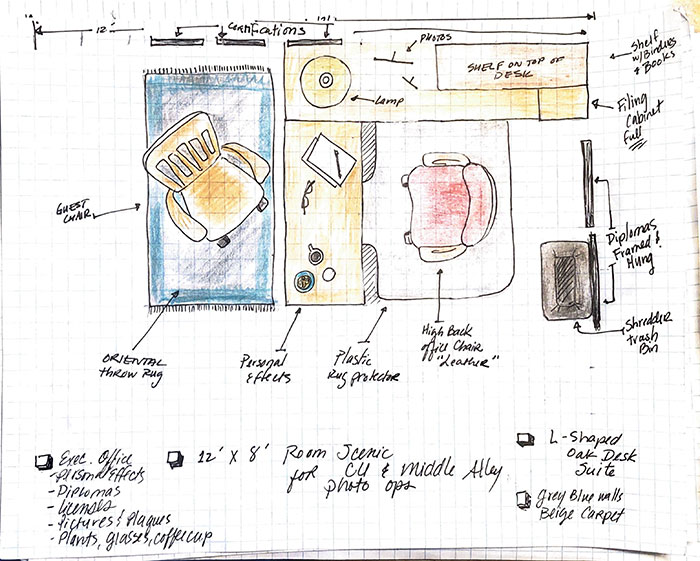 The task was tall — capture 90 final images in one day. The images needed to show their crew at work in a fire and flood cleanup scenario. Image Brew sourced a warehouse and had sets built by a talented crew of set designers. It was my job to capture it in a way that felt authentic.

Ninety images is a lot for a single day. I knew I wouldn’t have time to adjust lighting for each individual shot on the shot list like I normally would on a commercial photo shoot. Instead, I decided to approach the project like a documentary shoot rather than a commercial photo one. So I first had the shot list laid out in the order First Onsite crews would normally approach their work. Then I designed the lighting in a way that needed to work across multiple angles.

For the fire scenario, house lighting would typically be nonfunctional. First Onsite crews would usually work then with portable shop lights. So I set up my lights as if daylight was pouring in through a window out-of-frame. This would add shape to the scene. Then I used the shop light to my advantage as a prop and a light source that would add warm light and convey a feeling of heat, adding to the feel of a burned-out office.

For the flood scenario, house lights would typically be functional. The warehouse had existing overhead fluorescent banks. So I asked that that set be built under them so we could use them as practicals. The day of the shoot, I asked the gaffer to replace the cheap, green-tinted fluorescent bulbs with daylight balanced KinoFlo bulbs so that light would match up with my strobes. I positioned the strobes like I did for the fire scenario to mimic daylight from a window.

Then we got to work. We did fire in the morning and flood after lunch. For each, I had the First Onsite crew proceed as if they were tackling an actual fire and flood situation. Then I shot as they worked with minimal interruption.

To help sell the fire scene, we added haze with a haze machine and had the set designers throw ash in the air for texture (being this was done during Covid, all of us were already masked up, so, why not?). For the flood scenario, the set designer stood by with a hose to water things down as needed.

We managed to make our way through the entirety of the client’s shot list by the end of the day. I felt good about what we had captured and what I had to work with going into post-production.

First Onsite was very happy with the final images. I had a lot of fun getting dirty on this shoot and I really enjoyed working with so many talented creatives that helped make it all happen!

Rachel Sandoval is a teacher in the Denver Public School system. I met up with…

Bookends to a School Year